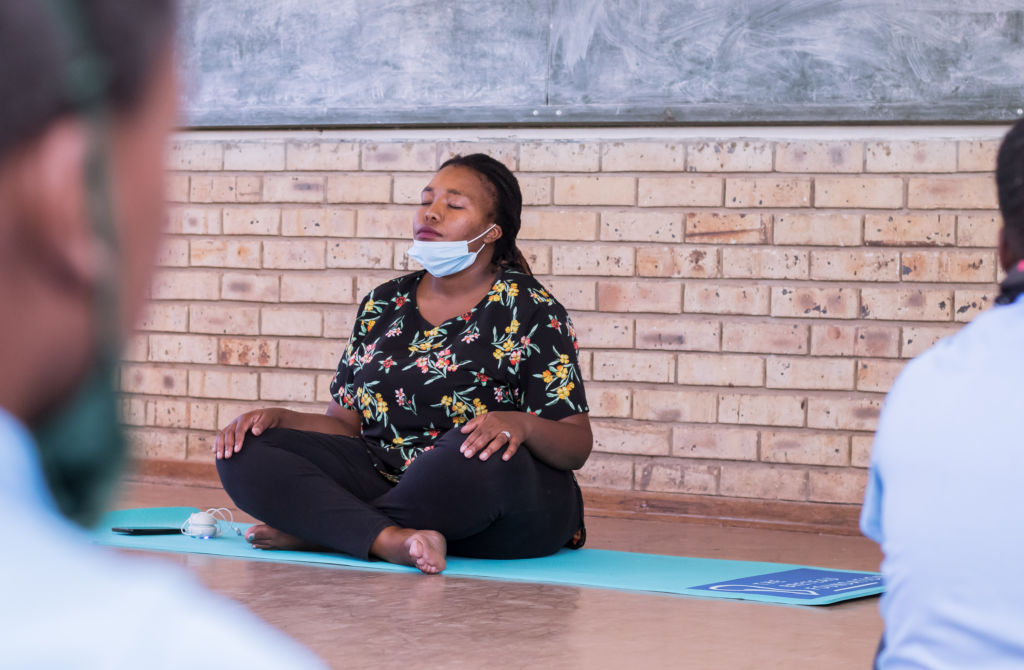 Despite the challenges of COVID-19, in the last year, Mahaneng ‘Honey’ Phali has taught the Coding & Mindfulness programme to over 150 learners in Khuma, a remote township in the North West Province, South Africa. The after-school programme has been so successful and well-received by the community, that Honey has expanded our programme and taught other facilitators to deliver the sessions. It hasn’t been easy, but Honey has been determined, resourceful, inspirational and a shining example of how teachers have a resounding impact on their communities.

Honey is so much more than a teacher. She’s a guide and a friend to the young learners, and she’s determined to give them something she didn’t have when she was a girl.

As a teenager, Honey developed a deep interest in computers. With no after-school programmes at all, she had to book sessions at the library to use a computer. After moving to Cape Town, whilst working in management, she also took several courses in coding and robotics because she was so passionate about technology. It wasn’t until her job took her into a school, however, that she discovered she had a special connection with children. Since then, Honey became an after-school coordinator, and also began working with the Breteau Foundation in 2018. When COVID-19 swept through South Africa, Honey lost her job at the school and did what many had to do – she moved back home.

It was meant to be…

In September 2020, when Breteau’s South African coordinator, Mona Mkumatela, received funding to deliver the Coding & Mindfulness after-school sessions, it was Honey whom she called. They had worked together in Cape Town and Mona knew that with Honey’s experience facilitating previous programmes, combined with her long-term interest in technology and her unique personality, she would be the best person to help her bring Coding & Mindfulness to schools in the city.

Over 1000 kilometres away, Honey was volunteering at the Nkululekweni Primary School. As much as she loved the work, volunteering was taking its toll, as it was stressful trying to organise and deliver classes without any funding. It was at this moment when she received the call from Mona.

Rather than being disheartened that Honey was now living in the North West, Mona realised how ideal the situation was. It’s in these rural regions where the need truly lies for after-school classes and finding experienced facilitators like Honey to deliver the sessions.

‘Unlike in urban areas, the children in rural communities don’t have phones, so when they get to use the tablets, it’s a privilege.’ – Honey

When Honey first approached the local primary school as a volunteer, she was delighted to learn they already had tablets, but they were without a teacher who knew how to utilize them. The Principal had also been keeping them safe at the police station and no one at the school was trained or skilled to implement them, until Honey!

With funding from the Breteau Foundation, Honey was able to deliver a holiday programme where the learners also got healthy snacks every day. It was so successful that it paved the way for the after-school classes.

‘My classroom is so quiet. The children are always engaged. Other teachers in the school come in when they have a headache!’ – Honey

Coding is what makes a computer work, and Mindfulness is about learning to pay attention with purpose. Together, the combined skills taught on the programme are giving the learners the chance to compete for a competitive future at university and in the workplace.

Before Honey could deliver the programme, she had to learn two software programmes: HeadSpace & CodeMonkey, which she learnt in just a day.

HeadSpace helps Honey to guide the learners with breathing and meditation exercises so they can transition easily from a hectic school day to the after-school programme, helping them to relax and focus their minds on the tasks presented to them through the CodeMonkey activities.

When the learners arrive for the after-school session, Honey first does some breathing exercises with them, or sometimes she might teach them yoga. Once they’re settled and focussed, the learners log into their tablets, put their headphones on and progress through the CodeMonkey games at their own pace. Honey’s learning is also on-going, and when a task is particularly complex, she and the children will work through the problem together.

Looking to the future

With the success of Honey’s classes, Mona asked her to teach others in Cape Town to facilitate the Coding & Mindfulness programme. After saving every extra rand of her stipend, Honey has now been able to buy a car, a life changing and career changing move for her! As 2022 approaches, the challenges of COVID-19 in South Africa have not eased, but Honey is feeling positive as she anticipates a pro-active future, giving back to the rural community that she grew up in.