The Founder and Director of Molo Mhlaba Khayelitsha’s first independent girls’ school, Rethabile Sonibare, is a leader and advocate for schooling for the most vulnerable group in South Africa – young black girls living in townships. Its genesis began in 2013 from the Thope Foundation, an after-school programme supporting children in Grade 5, 6, 7 and 8 with Maths, Science and English. From this Molo Mhlaba was born, offering a low fee independent school focused on combining literacy and numeracy with STEM learning.

We talked to Rethabile about her motivation to set up a school, the ways in which specific pedagogical models help learning, the impact of COVID-19, and how Molo Mhlaba has changed the wider community.

What inspired you to set up the school and foundation?

I grew up in Khayelitsha in 1984. When I was 6, I had the opportunity to go to a Waldorf school, which was one of the very few schools in South Africa that was semi-integrated. I was one of the first cohorts of black kids that they took in in 1990. This changed my life because all my peers who were living in the township had a different education.

I graduated from high school then got into university and did social work. What I went through really set me up for who I then became later, but I was still living between these two very, schizophrenic worlds that were between an impoverished home environment and an educated middle and upper-class society.

When I left university, I worked for NGOs that were trying to do grassroots work. My career started off in public health and HIV prevention at the peak of HIV and youth interventions in South Africa. I realised that all this health promotion, awareness and education information we were providing young people was having little impact because the quality of schooling and critical thinking skills were not being taught.

I ended up leaving health and moved to education because I realised that’s where I actually needed to be. When I had my daughter in 2012, we were living in Khayelitsha and I went into full mummy mode. My daughter was living in this township and I wondered who her peers were. If she was going to school, what kind of education system did I want for her? I then decided that I was going to start an after school programme and focus on STEM for girls.

In what ways do you think Molo Mhlaba has impacted the community, being the first independent girls school?

When we were awarded our lease, the community torched the building because they didn’t want to go into these schools. It wasn’t a warm reception but we managed to win them over. We have a waiting list of kids wanting to come to the school and I think we have become part of the politics of the community, women’s activism and women’s roles despite men still running the show for a lot of the time. 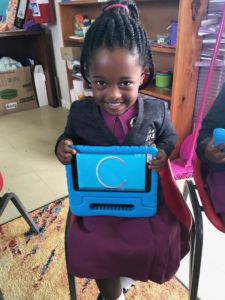 The community was quite upset that it wasn’t a boys-only school. Now they’re starting to get on board and realise that we do need spaces for women and girls. It’s good to support them but it’s definitely not been easy. The early childhood development mothers who run early learning programmes for children were writing outside of our school and trying to close us down because we were turning girls into boys or new scientists.

It’s hard getting community buy-in and stakeholder cooperation. I would say at the moment, they are letting us do what we want to but the majority of people who had problems with us initially have definitely bought into what we’re doing. They’ve realised actually that they just need to back down and either support us or not stand in our way.

How do you think Ed-Tech has helped and supported students?

I think from the beginning, we had tried different ways to deliver interesting learning content for the kids. Midway through the first year, we started with the Breteau Foundation tablets. Since using the Breteau Foundation tablets in the classroom, we’ve found that the girls are excited for tablet time each week and teachers use the tablets to reinforce learning on numeracy and literacy modules that they are working on in class. The tablets offer the girls a gamified way to extend their learning and address the various learning styles of learners. Girls use 3 out of 5 of their senses (sight, touch and sound) to practice activities. This is a really impactful way to ensure that learners remain engaged in their learning process through the course of the day as the tablets present a welcome reprieve from writing and reading in the conventional classroom manner.

Then what we focused on was coding and engineering, either using Lego or building computers from scratch. What it’s helped us to do is give us that edge over other schools.

If they’re doing a maths problem in the lab, for example, one plus one with two plus two, the children start to talk about it in terms of robotics or coding. They like this thinking approach across subjects. It’s a lifestyle approach.

What experiences have stood out to you the most?

The mums and the grandmothers were really strong voices in the girls’ lives and those voices often said, you can’t do anything. You’re going to be a domestic worker or a retail assistant at a shop. The way the mothers parent the girls, is the way that they were parented. These are intergenerational gender norms around girls and what girls need to do.

We needed to start to change the narrative in the home to be able to say, if we’re doing work with the girls, this needs to be meaningful. You guys can’t just negate what we’re saying because then it makes all the work redundant. So we had to make the parents integral to the school.

We work with mothers and the girls and have a  programme called the homeschool partnership, where we teach parents on how to enrich literacy and numeracy for emergent readers and writers. They don’t have the option to not be involved in their child’s education because part of our parent contract asks the parents to commit 50 hours of volunteer time a year.

How did the community initially respond to having to have that involvement within the school?

It’s still a big challenge because parents don’t believe that they’ve got anything to offer. When we have events, we ask parents to come volunteer and help. Initially, they opted for the little things. Can we buy wipes? Can we donate toilet paper? Well, that’s not the point, you can’t buy yourself out of this situation. You actually have to come. From there, we started realising some of our parents had skills. One of the ladies that cooks for us had actually gone on a course and had worked on a ship. She now runs our nutrition programme and we would never have known that had she not volunteered.

We even hired one of the parents now as a teacher. She had a teaching degree and was doing her Masters in education. She said, “I’m just a student. I don’t know anything” when really, she was a qualified teacher.

You start to realise that people have skills and they may not use them currently because they are out of work or have not had the opportunities presented to them.

What have you adapted in your teaching and programme delivery due to the pandemic?

We became quite individualised in the classroom. As a Montessori school, we were starting to mimic the very education system we were trying to walk away from, which is based on sitting with your workbook and doing that task on your own. 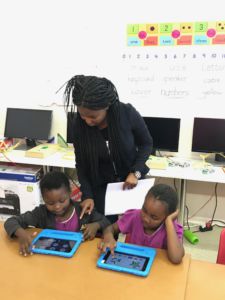 Every child has their own desks with their own masks, their own worksheets and stationery. It’s a temporary and expensive measure. What they’ve struggled with is social distancing because they migrate towards each other and they’ll hug each other. This is what they’ve known since they’ve been at school.

COVID was a strain but it became an opportunity to run this homeschooling WhatsApp group that we had with parents and also, deliver materials to their homes. We’re a bilingual school so made sure that all the materials were available in both languages and we were quite lucky because our partners put together content that we could distribute.

We realised that we needed to think about schooling beyond the four walls of our building. When partnering with the Breteau Foundation, we had access to a tablet programme which has apps that include language, literacy and life skills. The programme is great for school but once they leave, there’s no connectivity as they have no access to wifi. They don’t have access to cell phones and so we had to think about how we package our models for it to run remotely.

One of the ways that we extended our model to homes was by encouraging parents to download apps onto their phones. Where we could, we also provided some devices to the kids who didn’t have smartphones.

In what way do you think that the Montessori teaching approach benefits students in comparison to the more traditional style?

The Montessori approach is great in that it builds life skills that we’re coming to lose as a society. The focus is on the values, like compassion, patience, peace and self-regulation. Those are the things that we’re losing in society because we live in a world of instant gratification and individualism.

We are taught to be kind and for me to be kind back to you. You know kindness will always prevail. All of these values are brought to life in Montessori through stories, through play and through tasks or activities.

What further ambitions do you have for the school?

We’ve got tons of ambition. Our strategy for 2028 is to run 10 micro campuses across South Africa.

The big challenge is really around how we finance our model – being a philanthropic school, we rely on grants and donations which is not sustainable. At the moment, we realised that in our community there isn’t a lot of income.

Most of our parents are supported by social security and so they are unable to pay the fees. As a school, we have an obligation to start to create an economy around the school, so we’re looking at hiring women from our community, training them and employing them in the school. One of the school groups that we have running at the moment is also driving the opening of a women’s bank that can become our sole financing of our school models. Schools are insitutitions that outlast the individual and therefore the financial model needs to address that long term sustainability.

Other long term solutions we are investing in is providing seed funding to social enterprises such as a publishing house that can create content that is addressing multilingualism and cultural diversity  in African education.

In 2021, Molo Mhlaba will also embark on building its first infrastructure project called the “Dream School” which will see the school almost double its learner admissions and grow to another location in Khayelitsha. This campus will have a child-centred infrastructure in our community. We’re big proponents of community schools so our school needs to speak to the dynamics of our children and the community, and also needs to be accessible to them. All of us in education have to look at ourselves as a system within a system, rather than being an outlier.